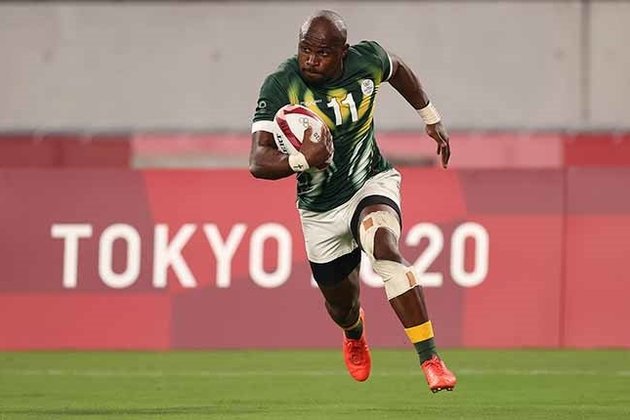 The Blitzboks only have themselves to blame for their unfortunate exit from medal contention at the 2020 Olympic Games as they failed to use their opportunities in their quarter-final defeat to Argentina in Tokyo Stadium on Tuesday.

Despite playing against six men after Argentina had a player sent off early in the first half, the Blitzboks could not get their momentum and rhythm going and suffered a heartbreaking defeat and according to team captain, Siviwe Soyizwapi, they never really got into the game.

"We never really got the opportunity to play with the ball and our plan was not implemented at all. Argentina came and forced their will and style of play on us, and we allowed it to happen," admitted Soyizwapi.

"Our heads are down at the moment; we have let ourselves down. We made silly mistakes. We did not keep our standards.

"Our strength lies in the way we implement the game plan and play as a team. That did not happen against Argentina. Our arrows were not shooting in the same direction."

Blitzbok assistant coach Renfred Dazel said the failure to adapt to the changed situation on the field also added to their woes.

"When they had six men, we wanted to go solo," said Dazel.

"We started well and had them exactly where we wanted to, but when they were a man down, we tried individually to exploit that. We had to stay true to our plan, despite playing against six men. We just did not adapt to the way they changed the game once they lost a player."

The South Africans will play Australia at 03:30 (SA time) on Wednesday, with the winner of that match contesting the fifth place final against the winner of the match between USA and Canada, the other two teams knocked out in the quarter-finals.