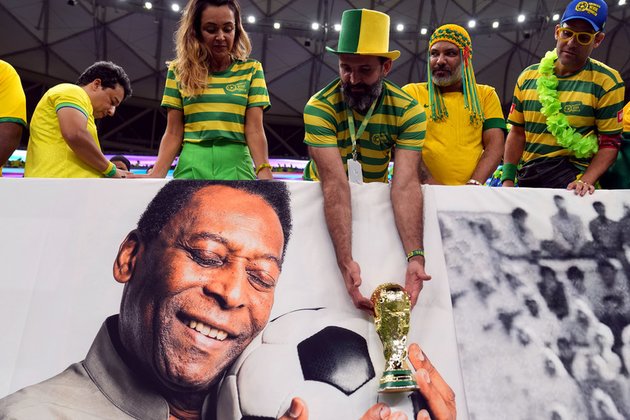 Flavia Nascimento has denied that her father is in palliative care

The daughter of three-time World Cup winner Pele has denied that the Brazilian football legend has been moved to palliative care.

The Folha de S. Paulo newspaper reported at the weekend that Pele, 82, had been moved to end-of-life care due to his chemotherapy treatment no longer working effectively.

Pele's doctors at the Albert Einstein Hospital in Sao Paulo have not confirmed these claims and his daughter, Flavi Nascimento, says the report is not accurate.

"It's pretty unfair people saying that he is in terminal condition, that he is under palliative care. Believe us: that's not it," Nascimento said in an interview with Brazilian broadcasting giant Globo TV.

"He is sick, he is old, but at the moment he is being treated for a respiratory infection and when he gets better he will be back home," said another of Pele's daughters, Kely. "He is not saying goodbye in a hospital right now."

Kely explained that Pele contracted Covid three weeks ago, which resulted in the respiratory infection that the latest report from medical staff at Albert Einstein detailed.

Pele was hospitalized last week, but is in a stable condition and has responded well to treatment for the infection, according to the medical report released on Saturday.

Pele had a tumor removed from his colon in September last year and has been receiving hospital care on a regular basis. Flavia Nascimento says there has been no complete remission of his cancer, though his medication has been adjusted from time to time.

As fans of Pele's boyhood club Santos held a vigil outside Albert Einstein, Pele uploaded a report from the hospital to his Instagram account on Sunday to try and put his followers' minds at rest.

"My friends, I want to keep everyone calm and positive. I'm strong, with a lot of hope and I follow my treatment as usual. I want to thank the entire medical and nursing team for all the care I have received," he wrote.

"I have a lot of faith in God and every message of love I receive from you all over the world keeps me full of energy. And watch Brazil in the World Cup too! Thank you so much for everything."

"Strength, King!," wrote the Brazilian FA, known as the CBF, in the replies section. "Everything will be all right! We are with you."

Brazil take on South Korea in the last 16 at Qatar 2022 World Cup on Monday, with Pele's fellow Santos academy graduate Neymar likely to return from an ankle injury.