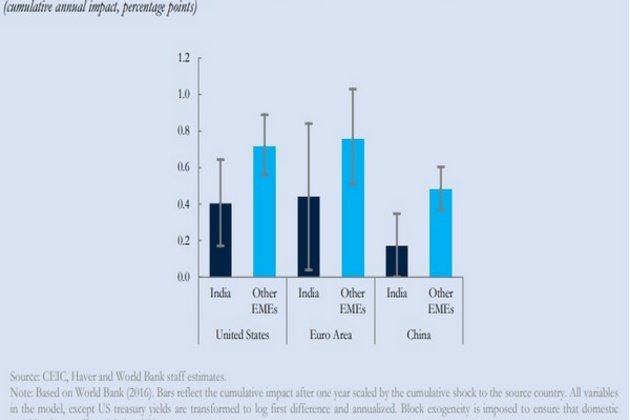 New Delhi [India], December 6 (ANI): In comparison to other emerging market economies (EMEs), India is less affected by growth slowdowns in the US, China and the euro area, according to a report from World Bank released on Tuesday. A 1 percentage point decrease (increase) in the US GDP growth rate is associated with a 0.4 percentage point decrease (increase) in India's GDP growth, it added.

For other EMEs, the World Bank in the report said impacts from the US, euro area, and China are at least 1.5 times larger than for India. It added India's relative resilience comes from its solid economic fundamentals, significant foreign exchange reserves, available policy space and prudent macroeconomic management.

India's capacity to safeguard against external macro-financial risks depends on its domestic resilience, external investment position, external buffers, and policy space to mitigate risks, according to the report.

World Bank said India's economy is well placed to weather the difficult external environment compared to other major EMEs - accounting for 84 per cent of the total EME nominal GDP - especially when compared to India's economic situation in the immediate run-up to the 2013 taper tantrum.

During the 2013 sell-off of EME assets, India was classified as one of the 'fragile five' economies due to weak macroeconomic fundamentals relative to other major EMEs.

Writing on Indian rupee, the report also said Indian rupee had been one of the best-performing EME currencies, in terms of volatility and the size of exchange rate movement. The nominal effective exchange rate (NEER) of commodity exporters -- Brazil and Indonesia -- appreciated significantly due to substantial gains from rising commodity prices.

In case of Mexico as well as Brazil, the NEER has appreciated in lockstep with rapid monetary policy tightening, which has made the currencies an attractive option for carry-trade, the report added.

Meanwhile, India's NEER has depreciated by 0.3 per cent, in year-to-date terms (as of August) even as its trade deficit has ballooned in the same period. The report said this muted depreciation pressure on Indian rupee is underpinned by the Reserve Bank of India (RBI)'s intervention in the forex market to mitigate the volatility and widening interest rate differentials vis-a-vis the US which has attracted more portfolio flows in the recent months.