FIFA World Cup, Quarter-finals: Brazil set to battle it out with Croatia for semi-finals spot 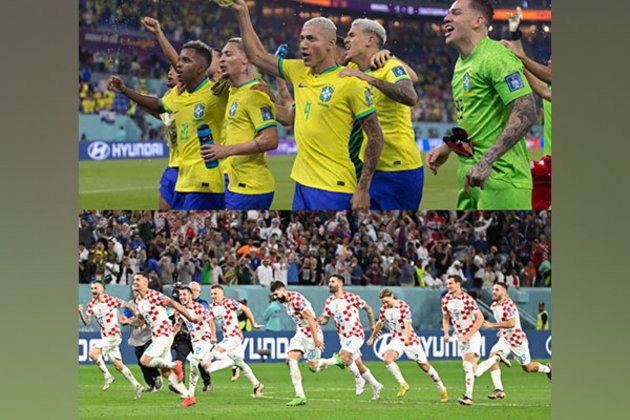 Al Rayyan [Qatar], December 8 (ANI): The Round of 16 is now complete, and the final eight standing teams will now compete for a semi-finals position. Brazil and Croatia will lock horns at the FIFA World Cup 2022 in the quarter-finals on Friday.

It will mark just the fifth time these two football nations have played each other, and the third in the history of this competition.

Brazil clinched a spot in the final eight with a commanding 4-1 win over Korea, leading at halftime by four goals.

Vinicius Jr, Neymar, Richarlison, and Lucas Paqueta all scored as Tite's side dominated the first 45 minutes. Paik Seung-ho grabbed one back with 15 seconds remaining, but it was too late for the Koreans.

Croatia entered the last-eight match having played an extra 30 minutes following a 1-1 draw inside 90 minutes in their round-of-16 clash with Japan. The 2018 runners-up triumphed on penalties, with goalkeeper Dominik Livakovi stopping three.

Of the four previous meetings between Croatia and Brazil, who holds the upper hand? Read to find out the exact head-to-head record between the two teams.

The last time these two sides met was in a friendly four years ago as they prepared for the World Cup in Russia. Brazil was eliminated in the quarter-finals, while Croatia advanced to the final before being defeated by France. But it was the South Americans who appeared ready for business in that June friendly, defeating their opponents 2-0. Tite's side had 63 percent possession and nearly double the number of passes on the night, but it would take them until the 70th minute to break through.

It would come courtesy of none other than Neymar, who came on at halftime to offer them greater forward presence. Roberto Firmino, who was not chosen for the tournament in Qatar, clinched the victory in stoppage time with a wonderful chip over the keeper.

Croatia currently has a rebuilt back five, with Dejan Lovren being the only player from that game to start their round-of-16 match against Japan on Monday (5 December). Joko Gvardiol, 20, now partners him at the back and has had an outstanding campaign thus far.

Midfield stalwart Luka Modric is an ever-present fixture for his national side and will lead them out on Friday.

The Brazilians have also changed their lineup in the last four years, and their firepower up top is unrivalled. In addition to Neymar, they have Vinicius Jr, Raphinha, and Richarlison, not to mention a plethora of talent on the bench.

The head-to-head record does not bode well for Croatia's chances in the forthcoming quarter-final, with Brazil leading the series. The South Americans have won three of the four games they have played, with a friendly in 2005 resulting in a draw. Two of their three triumphs have come in this competition, the first in 2006 and the second in the tournament's opening game in 2014.

Croatia would need a historic first-ever win over Brazil to reach the World Cup semi-finals in 2022 if they are to advance to the final four. (ANI)