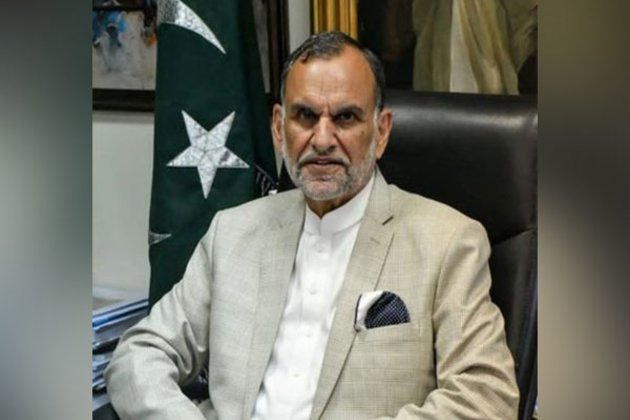 Islamabad [Pakistan], December 9 (AN): A district and sessions court in Islamabad on Thursday adjourned Pakistan Tehreek-e-Insaf (PTI) Senator Azam Khan Swati's bail plea over controversial tweets case till December 12 without a hearing. Azam Khan Swati continues to remain in Balochistan police custody on a physical remand in one of the cases registered against him, The News International reported.

Swati also faces charges of using foul language against military officers in tweets in separate cases. During the hearing, special judge Raja Asif Mehmood said that he will soon be transferred to another court and a different judge will hold a hearing on the plea. Mehmood adjourned the hearing and stated that he will hear the plea if his transfer notification is not issued by December 12, according to The News International report.

"The notification of my transfer to another court is going to be issued. The new judge to be posted here will hold a hearing on this plea," The News International quoted Raja Asif Mehmood as saying.

According to The News International, Azam Khan Swati's lawyer in the court said that multiple cases have been registered against Azam Khan Swati in Pakistan over his controversial tweets. However, the Balochistan High Court ordered not to file additional cases against Swati.

On December 2, Balochistan police arrested PTI Senator for a similar case filed against him in Quetta, as per the news report. He was already on judicial remand in Adiala Jail at the time of his arrest. Meanwhile, Pakistan Tehreek-e-Insaf Chief Imran Khan has condemned the arrest of Azam Khan Swati. On December 3, Imran Khan in a series of tweets said, "The entire nation is shocked at the vindictive cruelty Senator Azam Swati is being subjected tofor what crime? For intemperate languageasking questions which is the right of anyone in a democracy? Internationally Pak and esp our military is being perceived increasingly negatively."In the tweet, Khan said, "because the present Imported govt is seen as a mere puppet govt. One had hoped the new mly ldrship would have immediately disassociated from the 8 mths of Bajwa's fascist actions against PTI, the mediacritical journalists. The 74 yr old heart patient Senator Swati must be released immediately."Imran Khan in another tweet mentioned, "not only because he has committed no crime to deserve this mentalphysical torture, but also because this petulantvengeful targeting is undermining our mly's credibility which is critical for a strong Pakistan." (ANI)