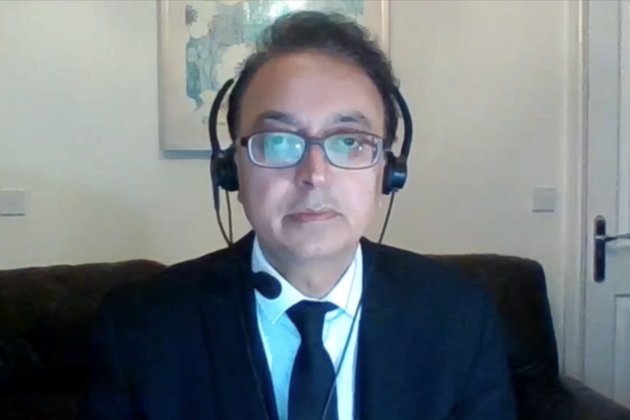 The execution of 23-year-old Mohsen Shekari was horrifying and shocking, says Javaid Rehman, the United Nations Special Rapporteur for Human Rights in Iran. In an exclusive interview with VOA's Persian Service conducted Thursday via Skype, Rehman, who was in Britain, urged the Iranian government and the people of Iran to follow and respect the universal declarations and provisions on human rights.

The following transcript has been edited for clarity and brevity.

VOA: Let's start with the news that broke on Thursday about the first execution of a convicted anti-government protester, Mohsen Shekari. What is your reaction?

U.N. SPECIAL RAPPORTEUR FOR HUMAN RIGHTS IN IRAN JAVAID REHMAN: My reaction is absolutely horrified, shocked, and outraged at Mohsen Shekari's execution, the news of which broke this morning. He was executed by the Revolutionary Court, which found him guilty of moharebeh [waging war against God]. And, as you know and as your audience would know, the Revolutionary Court violates all of the rules of due process and fair trial. Shekari was tortured and forced to confess. And if you consider the trial and the execution, it took less than two-and-a-half months, which unfortunately also reflects the authority's determination to generate a sense of fear amongst the people of Iran and in particular the protesters.

VOA: That leads to my second question: Shekari was convicted on Nov. 1, and it was upheld by the Supreme Court on 28. Many believe it was not a fair trial, even according to Islamic Republic's own laws.

REHMAN: Yes, in relation to the first part of your question, unfortunately, regrettably, it seems certain that he was denied access to a lawyer. He was tortured. He was made to confess, and there was a determination on the part of the judiciary that includes the Revolutionary Court and the Supreme Court to sentence individuals to the gravest possible punishment. And in this case, it is the death penalty. And his execution, as you said, has taken place in a very short time since his trial began. So, the international community has been rightly horrified and shocked. The news has outraged all of the world, and there has been condemnation of this execution, the execution of this young protester. Now, I think that the international community has to take very seriously this threat, that the Iranian authorities would execute more protesters. They are trying to instill and generate fear amongst the people of Iran and the protesters, and it, to me, it shows also a complete disregard of international human rights law, the values of human rights. And it also shows a complete disregard of the Human Rights Council resolution, which you know was adopted in the special session on the 24th of November, which established a fact-finding mission to ensure accountability. So, the Iranian authorities are trying to create this atmosphere of tension and hostility with the rest of the world community, and they are deliberately violating and breaching international human rights law.

VOA: Regarding the Human Rights Council's fact-finding mission, how has the first hanging of a protester affected the activities of this mission?

REHMAN: Yes, on 24th of November, the Special Session convened by the Human Rights Council adopted this international, independent fact-finding mission, and one of the key roles of this fact-finding mission is to ensure accountability and to collect and collate evidence for future trials. Now, as I just said, the Iranian authorities are on a path, it seems, to hostility and confrontation. They have, we know that they have suggested a lack of cooperation as they do not cooperate with my mandate. They seem to be suggesting that they will not cooperate with this fact-finding mission. And they, as I say, they are telling the Human Rights Council and the international community that instead of cooperation, they would follow the path of hostility and lack of cooperation, and they have signaled through their action this morning through the execution of this young man, who, to my mind, was an innocent person. He was denied an access to a lawyer. He was tortured. He was made to confess, so the Iranian authorities have violated every norm of human rights law. And this is a path to confrontation. And the fact-finding mission would have to address the issue of accountability in relation to the role of the judiciary, the role of the Revolutionary Court and the role of the Supreme Court.

VOA: Is there any update about the fact-finding mission and its activities, any development that you can share with us?

REHMAN: Well, I know that the Council resolution was adopted, and thereafter, as I understand it, that Human Rights Council and the president is taking efficient and quick actions to ensure that the fact-finding mission becomes established and is operational as soon as possible.

VOA: So, as you mentioned, you said last month that you were concerned at a campaign of death sentences over recent protests in Iran.

REHMAN: Yes, I said, I'm afraid that Iranian authorities would react with hostility and in a confrontational mode, which unfortunately has become a reality this morning with the execution of Mohsen Shekari. Now, what the families and human rights defenders in Iran can do is to make submissions. They should make submissions to my mandate, provide us with as much evidence as is possible. I will of course be reporting to the Human Rights Council in March, but also it would be helpful for the independent fact-finding mission. It would be helpful for their work because I will be cooperating fully with the fact-finding mission and I will be providing them with all of the materials and all of the evidence that I have gathered, so please by all means I would request your viewers and people in the Islamic Republic of Iran to send me all of the documentations and all of the evidence and to approach me with whatever information they have so that I can collect that and support the fact-finding mission, which will become operational in the coming weeks and months.

VOA: High ranking officials of many countries including the United States have condemned the hanging of protesters in Iran.

REHMAN: I think it's a very tragic and unfortunate day in the history of Iran. It is a tragic day for human rights, for people who believe in human rights, rights of protesters and rights of people, the rights of civilians who want their human rights restored and respected. And I would urge the international community and I would urge member states of the United Nations to take individual as well as collective action. So, one way would be for states, member states of the U.N. to talk to the Iranian ambassadors and their counterparts in their countries. It's a matter of human rights. It's a matter of human dignity. So, they must take this very seriously. They have to talk individually to the ambassadors and to the missions that they have. Some states have better relations, so they can actually have a dialogue with them. Others can still exert pressure. The international community should exert pressure. I would urge the United Nations General Assembly and the Human Rights Council to again take note of this very serious, unfortunate development and take all possible action that is within the power of international law to exert pressure so that we do not see a repeat of what we have seen today in the form of another execution of a protester.

VOA: My last question, sir, is regarding Saturday, which is Human Rights Day. What is your message to the Iranian government as well as the Iranian people on this day?

VOA: Thank you so much sir.