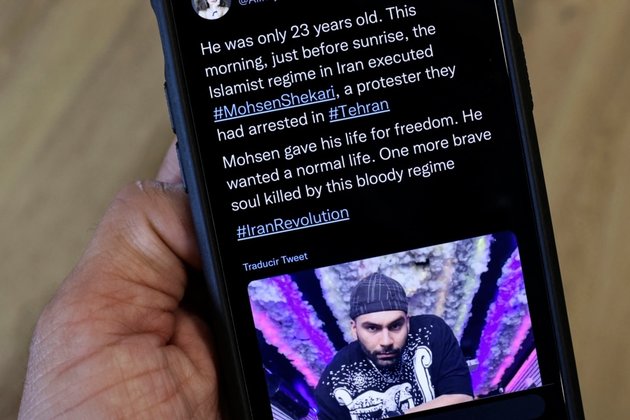 International outrage met Iran's announcement Thursday of the first execution of a young man convicted for his role in the ongoing wave of anti-government protests.

State media reported Thursday that Mohsen Shekari, 23, was hanged Thursday morning after being convicted and sentenced to death for blocking a street and attacking a security force member in Tehran, who needed stitches to close the wound.

'I'm absolutely horrified, shocked, and outraged at Mohsen Shekari's execution,' Javaid Rehman, U.N. Special Rapporteur on the situation of human rights in the Islamic Republic of Iran, told VOA Persian Service in an interview Thursday from the United Kingdom.

The international community, he added, needs to take seriously that Iran will execute more of the protesters who have been sentenced to death. Iranian courts have issued at least 10 death sentences for people arrested in connection with the protests, but Shekari was the first person executed.

Rehman said there was evidence that Shekari was tortured and that he was denied access to a lawyer.

'Salavati alone has sentenced more than 100 political prisoners, human right activists, media workers and others seeking to exercise freedom of assembly to lengthy prison terms as well as several death sentences,' the U.S. Treasury said in sanctioning him in 2019.

Amnesty International expressed horror at Shekari's execution after what it called a 'grossly unfair sham trial.' He was arrested Sept. 25 and executed Thursday, a span of less than 11 weeks.

The director of Oslo-based group Iran Human Rights (IHR), Mahmood Amiry-Moghaddam, called for strong international reaction, fearing 'we will face mass execution of protesters' without it.

Washington called the execution a 'grim escalation,' and the prime minister of Italy and the foreign ministers of Germany and the U.K. deemed it what one called 'unacceptable repression.'

Hadi Ghaemi, director of the Campaign for Human Rights in Iran, told VOA's Persian service that all death sentences in Iranian courts are 'political killings.'

The civil unrest in Iran was triggered by the September death of an Iranian Kurdish woman, 22-year-old Mahsa Amini, who had been detained by the country's morality police for not wearing her hijab properly.

On Wednesday, student protesters were in the streets across Iran. VOA's Persian Service cited reports that protests took place around at least 20 universities where security and plainclothes forces clashed with students.

Iran was already on Day 3 of a strike called by protesters. They had called for shop owners across the country to close their businesses through Wednesday to bring about government reform.

Iran's judiciary chief, Gholamhossein Mohseni-Ejei, ordered the arrest of anyone encouraging shopkeepers to close their businesses.

On Thursday, Hossein Ashtari, Iran's police chief, said 'the police will not show restraint in dealing with security threats,' according to ISNA, the Iranian student news agency.

Rights groups say at least 471 people have been killed during the recent protests.

VOA's Persian Service contributed to this report. Some information came from The Associated Press, Reuters and Agence France-Presse.